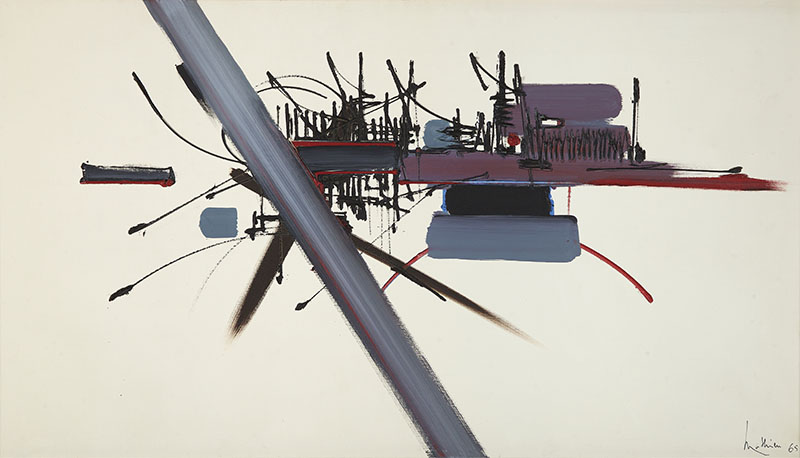 Galerie Templon offers for the first time a solo exhibition of Georges Mathieu. The exhibition features around thirty paintings created between 1960 and 1979, demonstrating the significance and inventiveness of a body of work that left a lasting impression on French art and imagination. In 1971, Pierre Dehaye said: “In the twenty years since lyrical abstraction began, never before has the artist attained this uniformity of luminosity and overall balance. Each painting is a celebration.“ Daniel Templon often refers to the moment when he discovered Georges Mathieu’s Capétiens partout ! in 1965, a “real visual shock” that triggered his desire to become a gallerist. Galerie Templon has published a catalogue to mark the exhibition, featuring texts by Edouard Lombard (president of the Georges Mathieu Committee) and American art historian AnnMarie Perl (Princeton) which analyse the importance of his historical contribution and the underpinnings of his international reception. Visitors will be able to view a monumental and historical artwork, measuring 2.5 by 4 m, L’écartèlement de François Ravaillac, assassin du roi de France Henri IV, le 27 mai 1610, à Paris en place de Grève, painted in 1960. After having seen it, celebrated American art critic and poet John Ashbery (Pulitzer Prize, National Book Award, National Book Critics Award) stated: “The new paintings of Georges Mathieu […] are among the finest work he has done so far and probably establish him as France’s foremost abstract painter. […] The new work has a richness, a completeness, a truth which cannot be ignored, and for the first time, perhaps, it has that kind of unquestionable authority that Jackson Pollock’s best work has. It should convince all but the most stubborn foes of abstract painting.” Patrick Grainville, member of the Académie Française, later wrote: “L’Écartèlement de Ravaillac summons dripping to the point of saturation, of bloody inundation.”