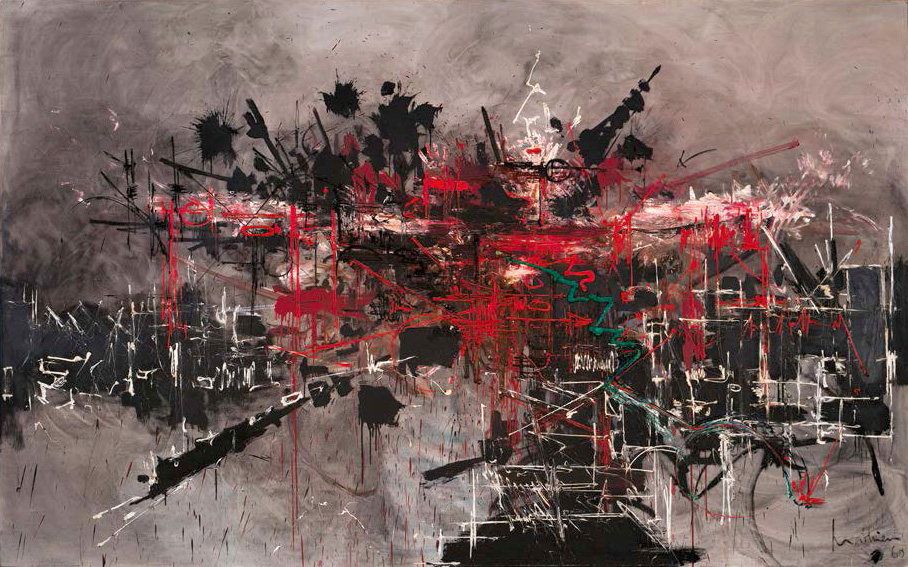 In its publication from September 24, Le Figaro, one of France’s newspapers of record, dedicated a full page to this article: “The Georges Mathieu renaissance has begun”.

Renowned the world over from the 1950s to the 1970s, this giant of lyrical abstraction then endured a long purgatory until his death. The artist is finally getting his just deserts from the art world.

Is this the start of a renaissance for Georges Mathieu, a French star of the 1950s and 1960s, known around the world and yet somehow undervalued? Everything suggests this is indeed the case. It is not by chance that the Parisian gallery owner Daniel Templon has organized the first personal exhibition of this founder of lyrical abstraction. Mathieu had a decisive role within the French arts scene, which was dominated by geometrical abstraction in the years following World War 2. […]

At the end of 1965, Daniel Templon’s discovery of Les Capétiens partout ! 1Capetians Everywhere!, hanging in the main staircase of the National Museum of Modern Art, was a “veritable visual shock which sparked (his) passion for painting,” he explains. In front of the immense 2.5 m x 4 m canvas adorning the walls of his Rue Beaubourg gallery, L’Écartèlement de François Ravaillac, assassin du roi de France Henri IV, le 27 mai 1610, à Paris en place de Grève 2The Quartering of François Ravaillac, assassin of Henry IV, King of France, on May 27, 1610 in Paris, on the Place de Grève, pictured at the top (1960), he holds the deep conviction that Mathieu is “a painter whose immense importance has not yet been fully understood by the art market”.

“Alongside Jackson Pollock, Franz Kline, Pierre Soulages or Zao Wou Ki, whose works go for tens of millions of dollars, Mathieu clearly merits a sincere comparison, he notes. One such indication came in 1959. Tellingly, after seeing his pieces displayed at the Kootz Gallery in New York, American critic Clement Greenberg, in his book Art and Culture, called Mathieu the most important European painter. […]

There will be a logical correction. And this exhibition should contribute to it.”

After a meteoric rise between the 1950s and 1970s, Georges Mathieu, whose works had been in the hands of the greatest dealers (from Stadler to Drouin, not to mention Facchetti) and had enjoyed acclaim thanks to his retrospective in 1963 at the Museum of Modern Art of the City of Paris, and to his publication of his book Beyond Tachism, endured a long period of purgatory, lasting until his death in 2012. Today, the trend seems to have reversed itself. […]

In private, Mathieu’s works have gone for over the 2 million euro bar. “It’s a very positive indicator of his worth. I sense a more and more audible quiver”, explains dealer Franck Prazan, who champions his work on the secondary market, with historic pieces from 1940 to 1960.

For the first time in his history, the artist made waves at Art Basel’s Art Unlimited, a gigantic modern and contemporary art event which has up until now been reserved for installations, monumental sculpture, performance, and video pieces. No one could have ever imagined a Georges Mathieu painting would be exhibited there, notwithstanding its massive 2.5 m x 6 m dimensions. “Five years ago, my project would have failed, Franck Prazan explains. I knew that it was a risky endeavor, but I was right, according to some art advisors who so far had looked down on the artist.”

“We’re seeing a rereading of this artist, who became a full-time painter starting in 1963, and who actually codified and put lyrical abstraction into practice. He was not just a great painter; he is also a painter whose work has left its mark on the history of painting. After Mathieu, painting will never be the same”, explains this dealer who went on to exhibit a Limbe 3Limbo from 1947, oil on canvas, 96 cm x 96 cm, in an installation devoted to Michel Tapié, at the next FIAC in October at the Grand Palais. […]

Asia begins to take note. After Zao Wou Ki, who beat records at Christie’s in Hong Kong, why not Mathieu? There is no reason the artist shouldn’t match or exceed de Staël, Soulages or Riopelle. “Renewal will come from this continent, confirms Olivier Fau, from Sotheby’s Department of Contemporary Art in Paris. When it went up for auction in Hong Kong for the first time around 7 years ago, the success was instantaneous.” Since then, there haven’t been any sales that didn’t include a Mathieu. He even had a breakthrough in Shanghai. On October 1st, a late canvas from 1989 entitled Souffle amer 4Bitter Breath (97 cm × 130 cm), was up for sale between 78,000 and 167,000 euros. The only thing left is to have a retrospective at a museum like the Centre Pompidou.

Link to the original article